Directing a skateplay, a show performed by skateboarders and comedians at Jayyous skatepark in Palestine with Noelle Ghoussaini.

You co-directed A Skateplay, inspired by Richard Bach’s famous novel Jonathan Livingston the seagull, at the skatepark of Jayyous, Palestine. How did you come up with the idea that the seagulls should be performed by skateboarders? And using a skatepark as a stage?

I was always inspired by the novella Jonathan Livingston Seagull. I was about 16 when a close friend of mine, who is a skater, gave me the book. I knew for a long time I wanted to use it as inspiration for a play. I imagined different ways of showing the flight of the birds and the idea of skateboarding representing flight was an idea that kind of just came to me over time. It felt perfect. The trials and errors of trying flight tricks in the book, linked with my experience watching my skaters try new tricks on for endless hours - finding a meditation, a freedom in the process of landing the move exactly right. Skating is the perfect metaphor for Jonathan’s flight tricks. In regards to the skatepark, I'm always interested in using public space as a site of artistic creation, social and political engagement and skateparks are already set up as a place of witnessing and watching. By making performance public, we create access, equity and something can be offered for free to a public. What better place to engage theatre and skateboarding than a skatepark?

Is it because of Palestine’s historical and political background that you find it a perfect match for the story to be told?

Our core team for A Skate Play consisted of Nilou Safinya, the producer, Esther Chang, the associate producer and myself, the writer and director. We decided to go to Palestine for many reasons. One of those, on my end at least, is a long-term dedication to Palestinian liberation, and believing in the power of arts and activism in supporting this struggle. We also worked with Palestinian organizations we already had partnership with: the Freedom Theatre and Skateqylia. We had long-term relationships with both. We knew the skatepark was being built in Jayyous and we imagined the play living in a global context - and all of have deep history and connection with the Middle East in particular. And after our first workshop in Brooklyn, NY in 2013 - the process towards making the project happen in Palestine in 2018 aligned over time, organically, from our vision and the partnerships.

The themes of A Skate Play focus a lot around freedom and liberation. So, to perform this outdoors in Palestine under the obstacles of the military occupation, with a female-led team, working across borders and languages to create a vision of liberation and also re-imagining public space was very powerful. At the skatepark, you can see the Mediterranean Sea, but you also can see the wall, the Israeli apartheid wall, blocking the path to the sea. So to create this project, in collaboration with incredible Palestinian organizations and partners - supporting their mission, while bringing it together with our vision was very powerful. And in the end, it was about giving youth access to arts, play and social engagement, when so much of that is taken from them because of the occupation.

The play was performed in arabic for the local community, most of the people went to "the theatre" for the first time then. How the audience reacted to the show? And especially to this freedom narrative that can sound surreal for people living under military occupation. And in which ways do you think storytelling has the power to help the youth in their self-develoment?

It was really exciting to perform the show at the public skatepark for a mix of audiences, locally for the Jayyous community and for a lot of youth who came to see the show every night it was performed. We had a special show for an audience of high school girls, we also organized buses from throughout the West Bank for people to come, among other audiences that came. I think you remember one of the most striking moments for our team was when we had the high school girl performance, we had over 150 students there and it was very impactful for all of us. For the girls to see a team that was led by women, in a play where we had strong female characters and storytellers, it was a very expansive experience I think for us and for the young girls and the teachers. To see the power and possibilities of women, collaboration, creativity and vision.

The themes of freedom are so multi-dimensional. The play is looking at freedom in all its forms. In regards to Palestine, It's not just about freedom from the occupation but it's about having to engage with society, what rules we have to follow and how to carve out our own path. I think a lot of the young people related to that and a lot of the young girls after that show, in particular, talked about that idea of following your own path, your own vision, your own dream and getting support from other female friends and teachers. There's a lot of obstacles to that and then on top of that, the play asks the question: as we carve out our own path, how do we take what we've learnt in experiencing our own personal liberation to offer back to community? How do we come back to our roots to share that liberation collectively?

In A Skate Play, you're using skateboarding as a way to personify the seagulls story. It's actually the perfect tool to embody these narratives. Even though it's obvious that the story is a strong metaphor about personal development and dreams pursuit, I think it's genius to actually show that's not just a metaphor but a real life story. And if it can be the story of a skateboarder, it could apply to anyone with their own passion. Was this the idea for making the kids keep on believing in stories?

One of our goals was creating a space for kids to keep believing in themselves. Both by working with young skaters who joined in the production to be part of a theatrical process, also giving an outlet for creative expression through our workshops with youth and then also a chance for young people and women to see themselves represented. The lead skater, Omar Hattab, was a local youth skater. We worked hard to make sure we had at least one female skater in the production - YOU! It can be such a powerful experience to see yourself on stage, to see someone from your community shining, celebrated, going on a journey. I believe that when humans see ourselves represented in front of us, it sparks the imagination and allows us to believe in what we can do ourselves. The story itself, a quest of liberation against all obstacles, and what that sparks in the heart of youth I think that was the ultimate goal of the performance : how do we keep youth actively engaged, creative, inspired and finding spaces for freedom under very dire circumstances of military occupation.

Having to deal with skateboarders, kids, comedians, locals and internationals at the same time for a director sounds quite hectic, how did you handle everyone's needs?

As a director, I had a wonderful team to work with. I had the wonderful opportunity to co-direct this piece with Faisal Abu Alhayjaa from Jenin refugee Camp who is a dear friend and long-term artistic collaborator from the Freedom Theatre. We also had a skate director Joel Meinholz, a pro skateboarder from the US, leading the skaters. Nilou Safinya who was the producer and Esther Chang the associate producer, and we are all also very close friends, so really it was such a team effort. And it felt like a family. I never felt alone. Everyone had such a strong ownership over the project and wanted to take part in making this play a reality. It was a communal effort. One of the biggest challenges was that we were working across skateboarding and theatre, Arabic and English, under the confines of military occupation, overcoming many borders. All these kinds of things put constant pressure on our team. Simple tasks like travel across checkpoints, or finding mics that worked became very challenging (among countless other things) but I think that this is the core of the project, beyond just the play: the act of us coming together and creating something despite the obstacles we faced. We cross these borders that are put on us by society that label us as separate beings. And we are moving beyond those borders, not ignoring them, but - saying yes - we can bring skateboarding and theatre together, yes - we can surmount the obstacles of a military occupation to do this production, yes - we can work across languages and form, so that we can rise towards something greater. 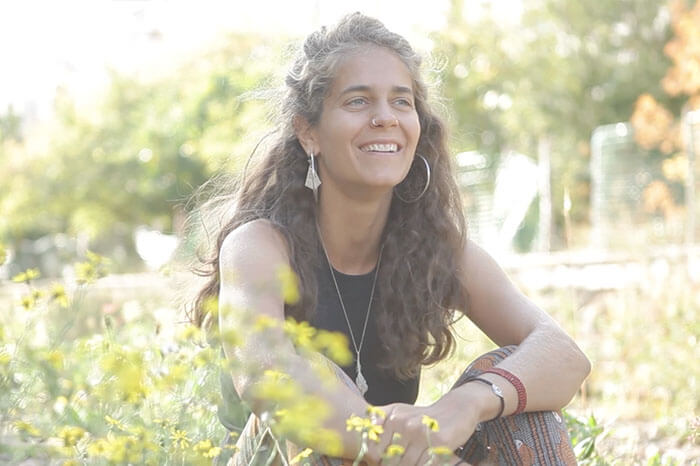 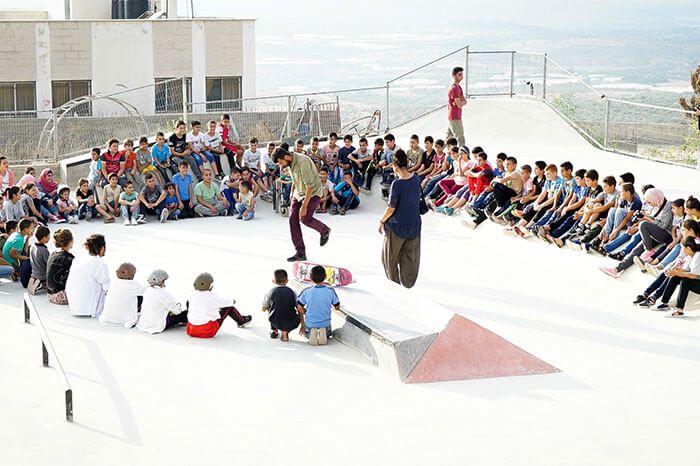 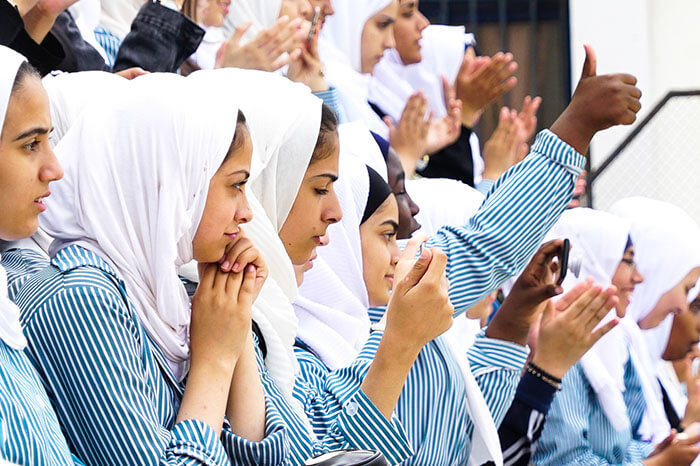 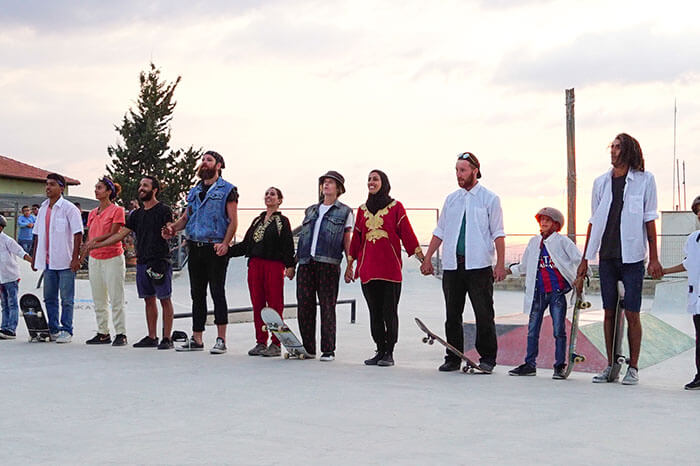 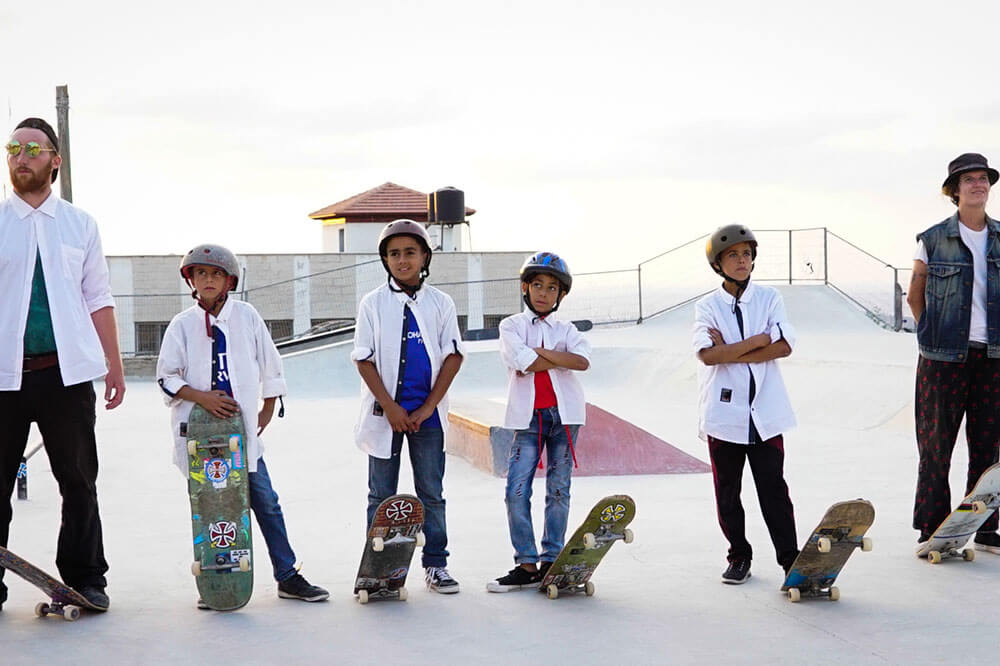 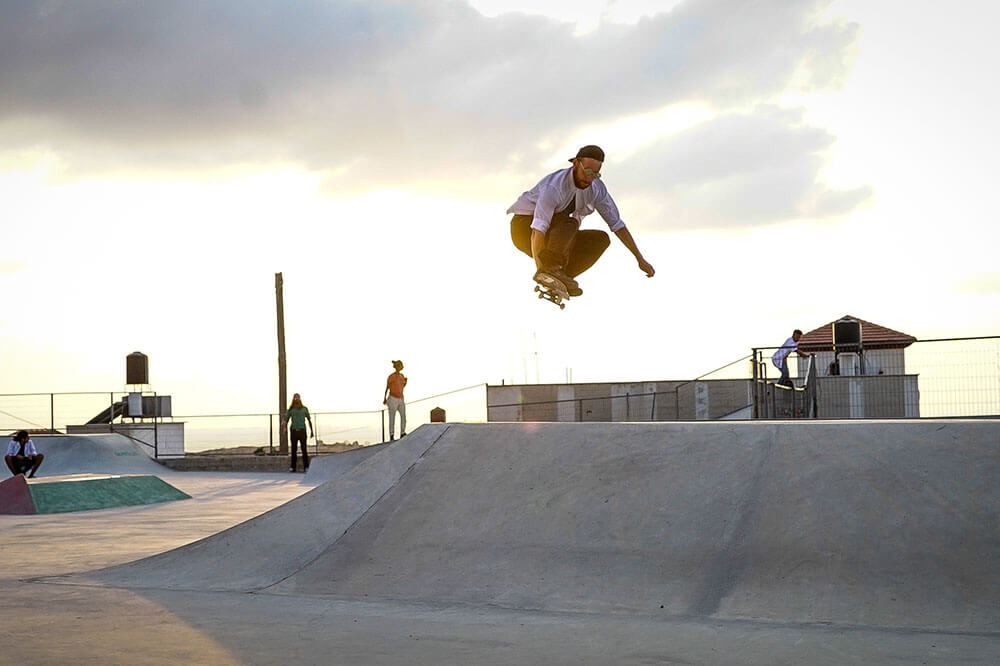