There has been such sad news from Afghanistan this week and we stand in grief with our family and friends in Kabul, Mazar and Bamyan. In such hard times, it's also good to know that positive things are still happening in Afghanistan and we will always try to tell these stories. Today we want to give you some good news. 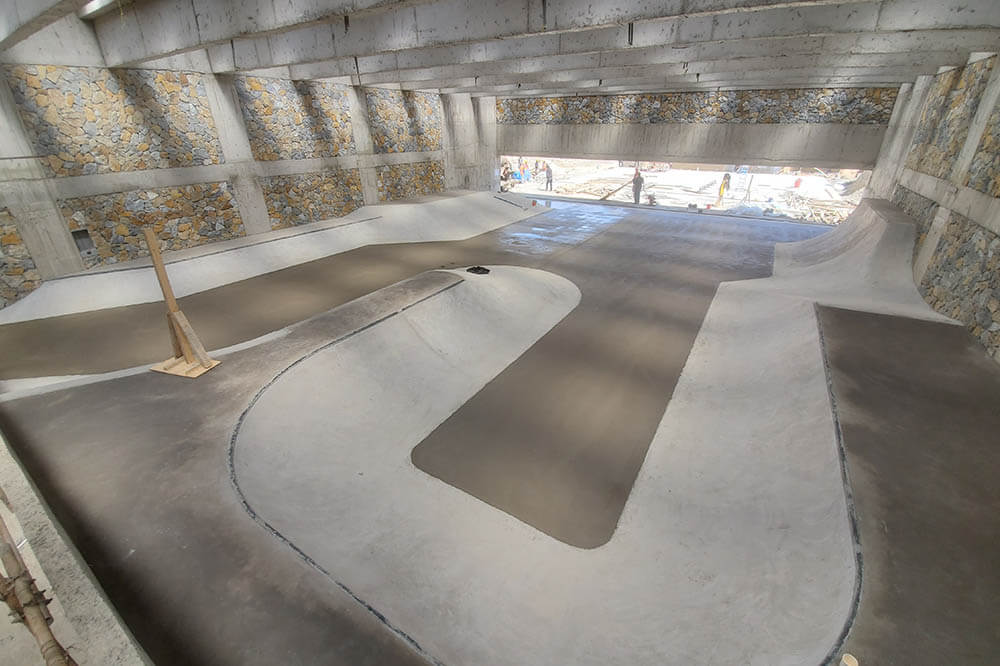 Skateistan built its third school in Afghanistan on the heights of Bamyan. The walls of the future school stand above the valley, facing the empty caves that used to be homes of the infamous Buddhas before it got destroyed by the Taliban in 2001. Despite the ongoing war tearing the country apart, Bamyan is a hub of peace, the largest town in central Afghanistan is populated by farmers growing potatoes, shepherds walking their herd, families minding their own business. We would have probably forgotten anything terrible we heard about Afghanistan in the mass media if our car wouldn’t have to go through a bomb check twice a day. We got used to security policies and made ourselves at home for the next three weeks, hosted by the kindest team of local skateboarders and workers, as well as Skateistan staff.

Engineer Amin, our new friend, did everything he could to make our stay the best journey he could. First, before we even got there, he had his team prepare the skatepark groundwork. They did really well, as none of them had ever worked on a skatepark before. They built retaining walls on the side of the obstacles at good heights and they shaped transitions in the dirt with a semblance of radius cut in a piece of foam board. They already had wood nailed in the concrete slab at a good distance from the obstacles bottom, allowing us to just screw forms into it at the good level.

We arrived a bit late, having to stay two more nights in Kabul at the start of our trip so it was a relief to see that we didn’t have to start from scratch and that we had a solid team of locals understanding our needs. Every Friday, we would have a day off, as it’s their holy day. Amin was committed to show us the most beautiful places around Bamyan : The Band-e-Amir national park with its frozen lake and snow-capped peaks, he also took us to the Buddhas cliffs where we had a special ascension inside the cliffs to the top of the bouddhas and had the chance to discover Gholghola city, the middle age abandoned town, a maze of ruins standing on a mountain.

Afghanistan is the country in the world with the highest percentage of girl skaters among the scene. It's a funny fact if you think about the women's place in the local customs, girls are not allowed to play football or even ride a bicycle, but they can skate. It says a lot about the importance of how you introduce something new into a community, it's not enough to just think anybody can do anything they want, sometimes you really need to welcome people, to encourage them, to make them feel at home. Afghans girls can't play sports or cycle because it's labelled as a men's thing, they can skate because Skateistan welcomes them with open arms and before anyone could say that it's a boy's thing, there were already too many girls skating. It was too late, it was genderless, wether anybody like it or not. When you compare the growth of the afghan skate community and the skate scene in the west, it says a lot about gender equity and about our culture, no matter how open minded we think we are in the west, the scene remained a boy's club for too long, even though there's no social norms against girls skateboarding. It's just not enough apparently, to not be against, you need to support it. And it goes for everything else for that matter. In the end, anything will be how we shape it and if we sit back to watch the movie play in front of our eyes, the ending may suffer. 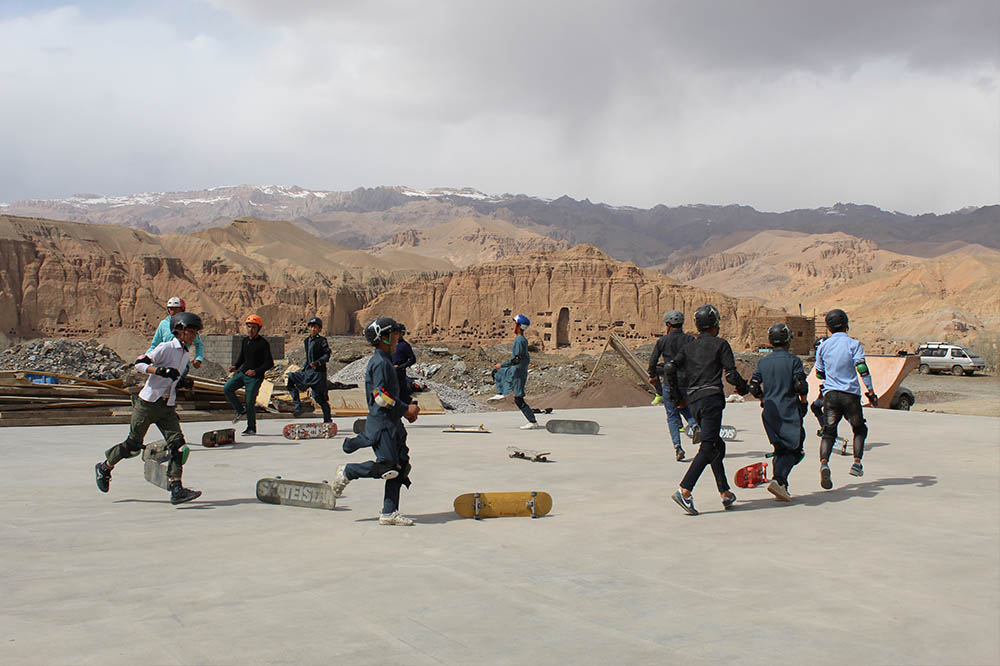 Skate and Create program from Skateistan

Skateistan has been operating in Afghanistan since 2008 and opened its first skate school in Kabul in 2009. Then later on, a second one in Mazar-e-Sharif and soon the third one in Bamyan. They are also working in Cambodia and South Africa. The biggest skate NGO in the world built itself over the years passing on the work on the ground step by step to their former students that are now part of the staff. They have now more than twenty employees in Afghanistan itself which is pretty crazy when you think about how it started a decade ago, in 2007, when an Australian skateboarder, Oliver Percovich, came to Kabul with spare boards in the hope of making skate buddies and ended up teaching a few kids the basics at a street fountain in Kabul. Now they have proper buildings hosting both schools and skateparks in multiple cities around the world, giving jobs opportunities to the very same kids they were teaching a few years back.

Three of those kids, now grown ups and married, some with children, and working full time with Skateistan, were sent to Bamyan to partake in the build with us ( Jesse Hale, Max Carter & Dan Maclachlan from New Line Skateparks plus Leo and me from Concrete Jungle Foundation) to learn the craft of skateparks construction with the project of extending the Mazar-e-Sharif park in mind. 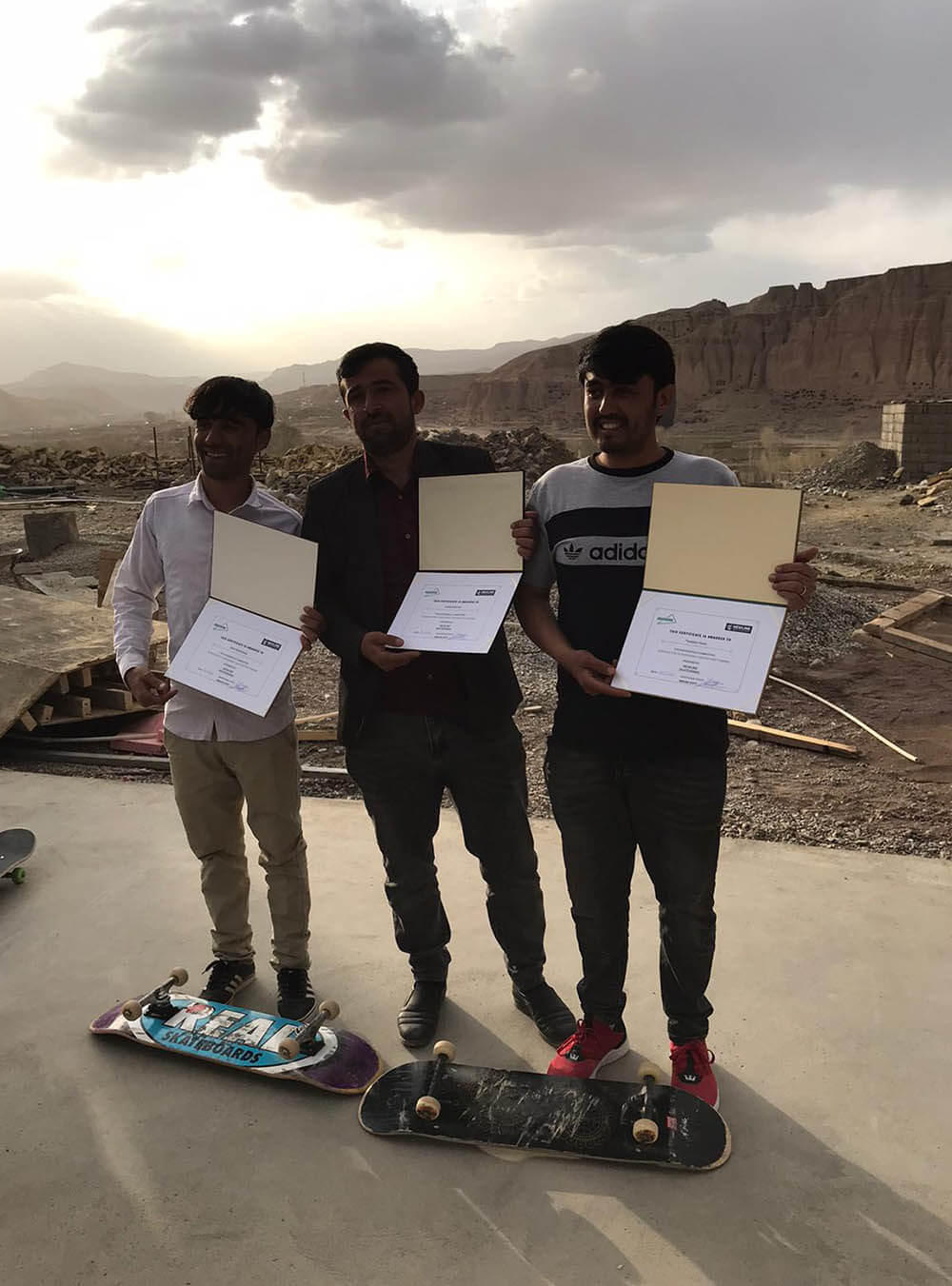 Our new afghans friends Aïnullah, Fereidon and Merza were very eager to learn and to help us in any way they could. They are real skate rats, making the most out of lunch breaks to skate the concrete slab next to the build site and play games of skate over and over. At the end of the build, Skateistan and New Line organized a ceremony celebrating the success of their construction apprenticeship. It’s not much but we could see what it meant for them.

We don’t always all get the same opportunities everywhere, we don’t all care about the same kind of things, we take what we have for granted and we crave for what we lack. Our apprentices were very aware that they lived a unique experience, being able to learn a craft that no one masters in their country from people like Jesse Hale from New Line skateparks, Canada who has more than 20 years of experience in the field . And so are we, insanely grateful to be chosen to live this amazing journey in a place we would probably never have had the chance to visit otherwise, nor to meet these wonderful souls that shared so much of their culture with us. Skateboarding has something truly magic that can lead us to follow paths we would never think we could have walked one day, a constant journey to the unknown. Thanks to everyone involved in this beautiful project. We miss you all and we can't wait to see what these guys will build in the future. 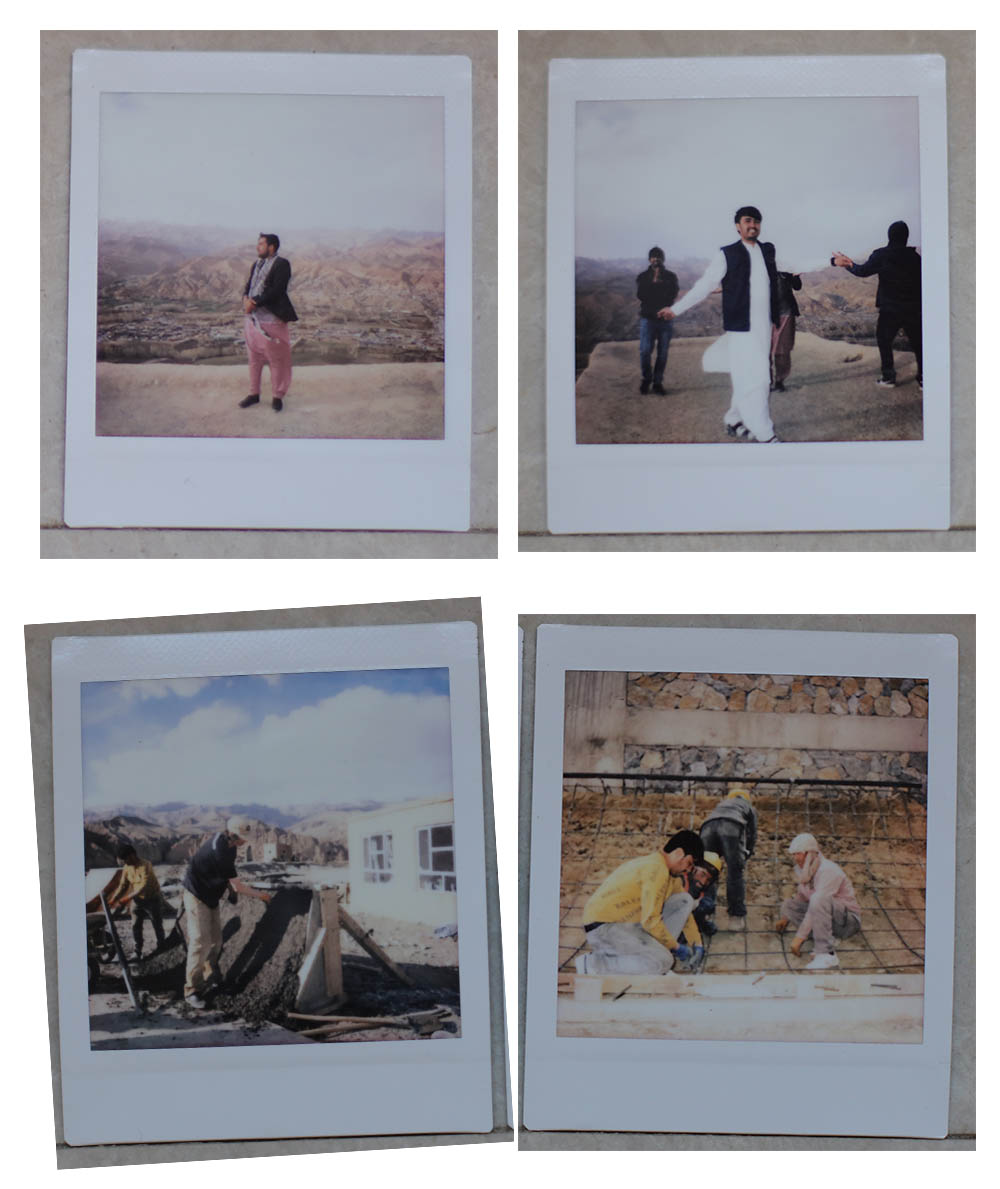 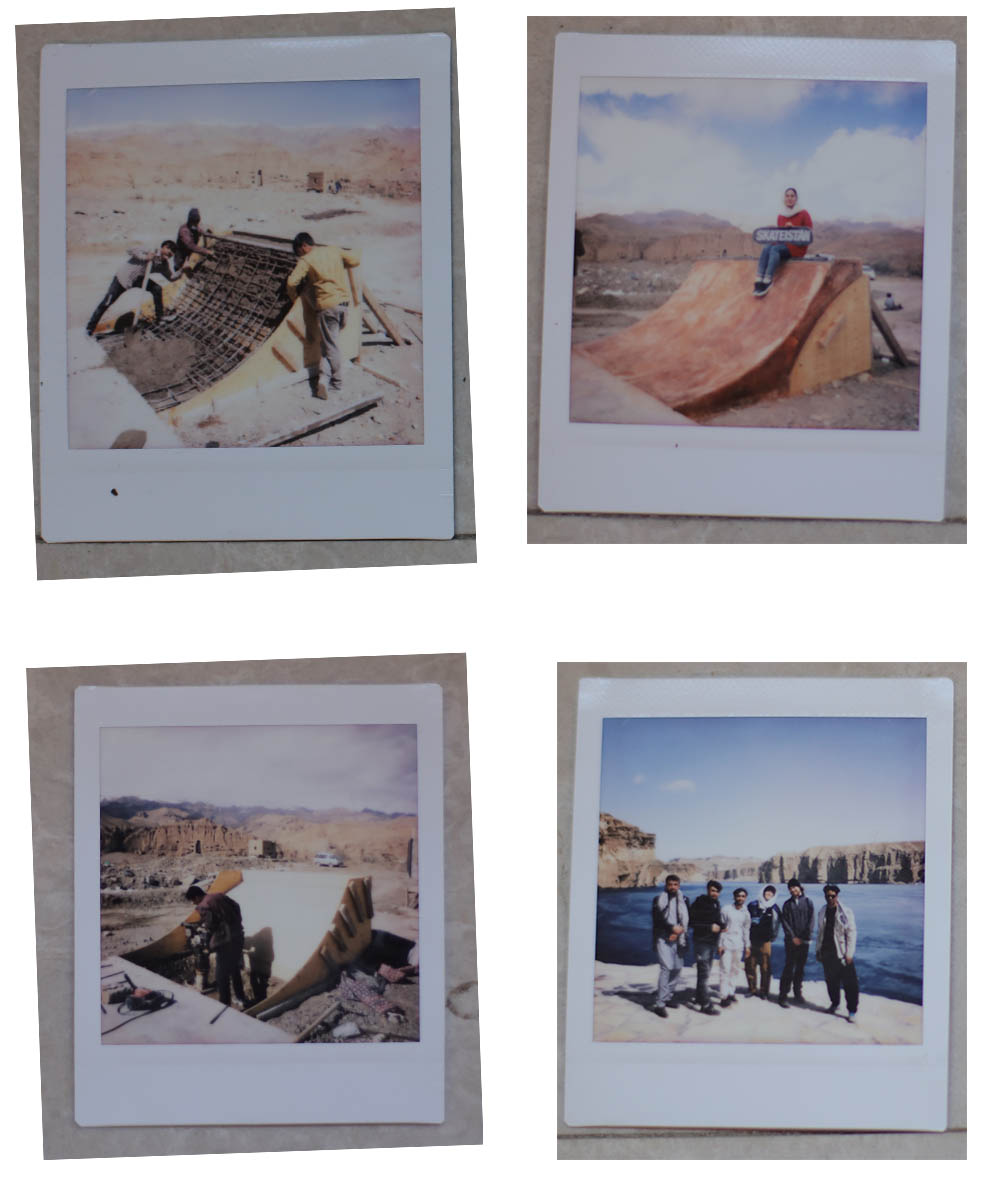 Skate and Create program from Skateistan